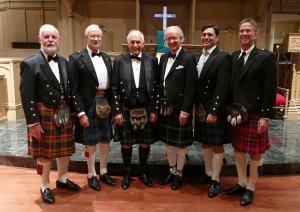 We welcome and encourage you to wear your tartans on Reformation Sunday. We will also honor those in our church family who have passed away.

What is Reformation Day?

Reformation Day commemorates the day in 1517 when a German monk named Martin Luther (1483-1546) strode up to the church in Wittenburg and nailed his 95 ‘theses’ (or propositions) to the church door.

Luther chose to do this on October 31 as he knew the church would be full on the next day for All Saints’ Day.

Luther’s intention when posting his theses was to highlight the practice of indulgences in the Roman Catholic Church. Indulgences were pardons from sin that could be bought, meaning that those who were rich enough could buy forgiveness for all manner of sins.

Luther had hoped that pinning his protestations would spark wider debate and harden public opinion against the practice.

However, so many people agreed with his ideas that they quickly spread across western Europe, helped by the recent invention of the printing press, leading to the religious revolt known as the Reformation.

The reformation led many Christians to break off from the Roman Catholic Church and establish new, independent churches of their own, such as the Lutheran Church.